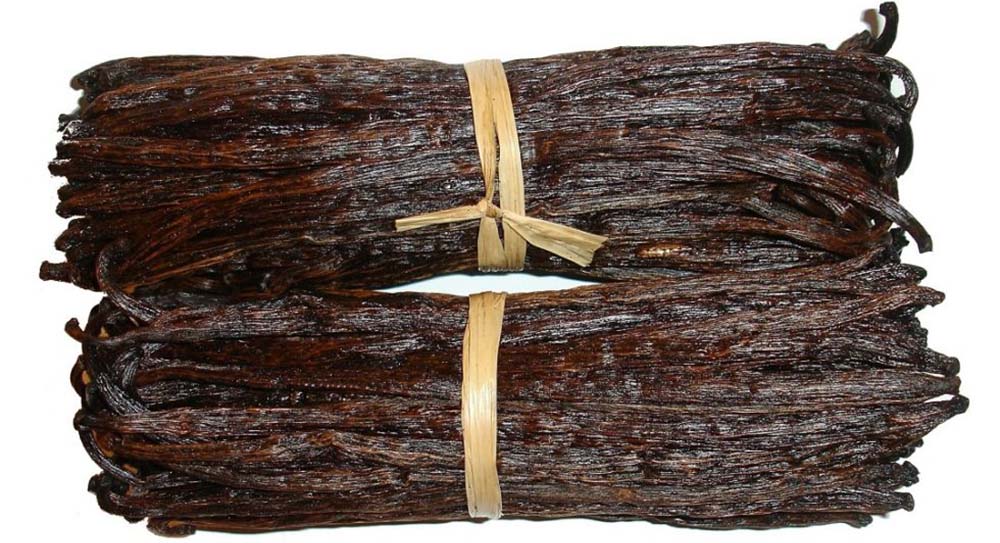 If you’ve ever gone shopping for vanilla beans, you may have had to choose between a variety of labels: Grade A, Grade B, Madagascar, Bourbon, Mexican… the list goes on. You’d be right to be confused — it’s a lot to take in! Here we’re going to break down the differences in all the types of beans — by grade, species, and country of origin — so that you can shop wiser and use your beans to their fullest potential.

Vanilla beans range from Grade A to Grade B. Some even have the distinction between Grade A-1 and Grade A-2. What does it all mean? Well, variations in grading are mostly due to moisture level and appearance, with Grade A beans having higher water content and suppleness than do Grade B pods. Because of this, each grade of bean has purposes they’re more suited to. (Contrary to the grading of poultry, for example, vanilla bean grades do not necessarily determine overall quality.)

Grade A beans are a great all-purpose bean for cooking and baking because the seeds can be scraped out and added directly to food. It’s even used as the central ingredient in some gourmet cuisine.

Reddish-black Grade B vanilla has a lower moisture content (15-25%), meaning it doesn’t carry as much water as Grade A. Being more concentrated is what makes Grade B vanilla ideal for making vanilla extract, which is a vanilla solution created by treating vanilla beans in alcohol and water. For this reason, Grade B vanilla beans are often called extract vanilla beans. When working with Grade B beans, people usually allow enough time in their recipes for this initial steeping process.

Does this mean that Grade A vanilla is better than Grade B? No. Again, the grading system is more dependent on variations in moisture content and appearance rather than quality. In fact, some might argue that Grade B vanilla is better because you get more beans for your buck since you aren’t paying for the extra weight in the water you’d get with Grade A beans. And because Grade B vanilla beans are less aesthetically attractive and require a bit more work to bring out its potential, they’re cheaper than Grade A vanilla beans

Now that we’ve established all the main differences between Grade A and Grade B vanilla beans, let’s have a look at the distinctions in flavor that come with different vanilla species, and where they’re grown around the world.

There are three main vanilla plant species: vanilla planifolia, vanilla pompona, and vanilla tahitensis. Vanilla planifolia is the original vanilla plant from Mexico and is now also grown in Madagascar, Indonesia, Papua New Guinea, and Uganda. It’s the most common type of vanilla produced in the world, and though the taste and scent of these vanilla pods vary slightly by country of origin, you’d recognize the pungent aroma and flavor as unmistakably vanilla.

The rich, slightly spicy flavor of Mexican vanilla pairs especially well with chocolate to bring out the fullness of both chocolate and vanilla. Madagascar or Bourbon vanilla is similarly strong, but it tends to be creamier and higher in the vanillin component, which gives vanilla its trademark taste. (“Bourbon” refers to the vanilla-producing islands near Madagascar, not the whiskey.) Vanilla planifolia from Papua New Guinea is creamy with a hint of caramel, while those from Uganda are said to taste some way between Mexican and Madagascar vanilla: it’s got a strong vanillin component with chocolatey undertones.

Vanilla pompona and vanilla tahitensis are the less common mutations of the planifolia relative. Vanilla pompona is grown in the Caribbean, Mexico, and South America (mostly Peru). This strain of vanilla, like vanilla tahitensis, is lighter, floral, and fruity, but it is also a tad spicy. Vanilla tahitensis — as its name suggests — is almost exclusively grown in Tahiti, but Papua New Guinea is one other nation that produces it. It’s the preferred vanilla when it comes to making fragrances, due to its high level of heliotropin, the chemical compound responsible for the floral scent. Pastry chefs also reach for this species, as its comparatively subtle flavor lends itself naturally to sweet bakes.

One key difference between vanilla planifolia versus the tahitensis and pompona varieties is that vanilla planifolia needs to be “killed” after being harvested so that the bean does not continue to grow. The most common “killing” is done by steeping the beans in hot water for a few minutes; the temperature and length of time will vary by curer and thus produce slightly different results. Another “killing” method, primarily used by Mexican curers, is to lay out the vanilla in the hot afternoon sun. This is why Mexican vanilla tends to taste woodier or smokier, as this curing method is harsher on the bean. But it’s all up to individual taste!

You might find even more variation on the market, but the distinctions outlined above just about sum up all the differences you’ll find when shopping for vanilla beans. Bottom line? It’s important to know what you want to use your vanilla for, in order to bring out its unique strengths. Perhaps you want a full-bodied, moisture-rich vanilla pod to go into your next lemon drizzle — go for Grade A Madagascar vanilla beans. Or if you’re looking to make an extract with a kick, try Grade B Mexican vanilla. Whatever you choose, we hope you have fun experimenting with all the possibilities!